The story of hockey’s twin sisters

Sep 3, 2022 Everyone in the area knows them as Neel and Sukh, hockey's Story, hockey's twin sisters 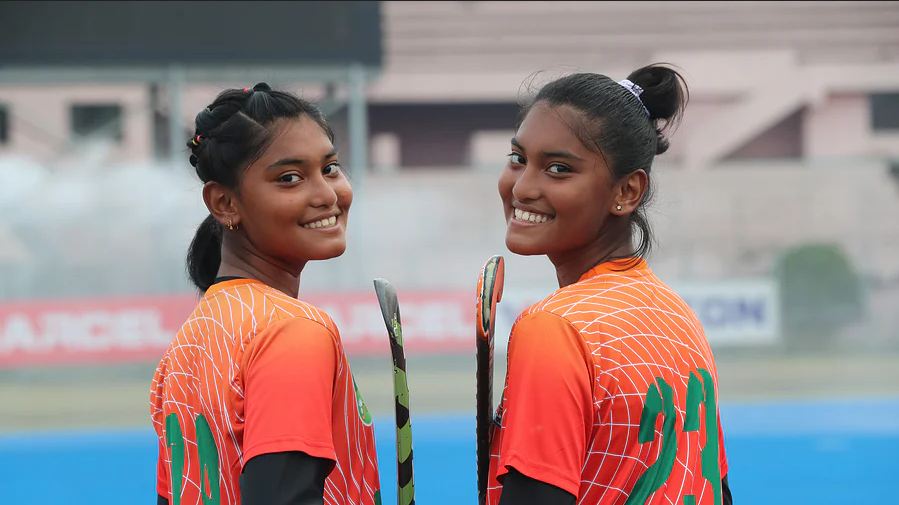 Everyone in the area knows them as Neel and Sukh. The full name is Himadri Barua and Niladri Barua. Himadri is only two minutes bigger than Niladri. But Niladri has grown to accept Himadri as a big sister! Twin sisters who are best friends.

This is the first time two sisters will play in the national stick competition. Before going down to play on the blue turf of hockey, Himadri was very excited, “I wanted to play in the Walton hockey tournament organized by the federation.” But at that time I could not play due to the start of BKSP camp. I am waiting to enter the field now.

The two sisters practiced under coach Mohammad Mohsin at Hockey Center Academy in Chittagong. There basically had to practice on the outer cement of Chittagong MA Aziz Stadium. But after practicing on the blue turf of the Maulana Bhasani Stadium, the twin sisters were charmed. That fascination in Niladri’s voice, ‘Actually, one kind of game is played on the grass field, another on the turf field. But we used to practice on cement. I did not get a chance to enter the outer stadium. It feels very good to play on the turf here.

Father Vijay Barua is a businessman in Chittagong city. Even though she was a girl, her family never stopped her from playing sports. Rather, the two sisters used to come to practice with their father. Although distant relatives criticize the twin sisters’ hockey game somewhat negatively. Niladri, however, does not want to pay attention to this, “No one in the area tells us anything about playing hockey.” But when going to a function or temple, the distant relatives call the father and say, your daughters have turned on. Don’t let them play. But we will continue the sport. We like to play hockey very much.

The two sisters will be playing competitive hockey for the first time. The twins want to get a chance in the national team with their performance. Himadri has that dream in his eyes, ‘We want to play well in the hockey series. One day we also want to play in the girls’ national team like our big sisters. More Hockey News